~7k miles on my JKU Sport 35x12.50x17 MAXXIS Bighorns, 3.73 gears with 2 1/2" lift. Superchips really helps in my eyes was getting about >10 before, after loading the FUEL XS I think thats what its called I'm get ~17 or more depending on where i'm driving. Haven't got to wheel it much, but looking to do some this month. I did drive from San Diego CA to Pascagoula MS a couple of months ago.

I've put about 8000mi on my d30 and 35s with no issues including a Moab and Ouray trip. My last xj had that setup too and was locked, no issues albeit kinda different setup. I definitely know my limits though and don't go crazy on the pedal, etc

ScoobyCarolanNC said:
Dang. What did you do, put some kind of limiting strap on until it could be fixed?

Nope drove her 50 miles through the Brindabella Mountains home, then 700 miles and back to see the family for Christmas, she's in the shop now for some tlc and a date with the hot stick [emoji23][emoji23]
Really didn't handle toooo bad [emoji848]
Didn't drive it like a demon though [emoji56]

167000km on her, 35's since 10000k, 4:88 locked rear and open front , new Synergy balljoints at 120k, munched an aftermarket front ( shall remain nameless, my fault) tailshaft 1 week after putting it in, broke an axle playing in the rock garden, but apart from that she has been real solid 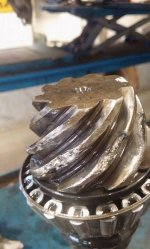 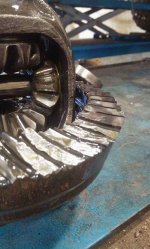 Been running Toyo M/T 35"s for 33k with no problems. I added c gussets, 4.56 gears, Truetracs and 1310 driveshafts front & rear. I am not a hardcore wheeler, but when I do wheel I go slow and easy on the gas.

Looks like too much torque on that pinion gear while Jeep was stuck. Teeth chipped.

I was trying to make the nose to point up a very steep muddy incline. I guess i used too much throttle You can break everythng, even a d60 axle if you driive off road like crazy but d30/ 35s combo is not so bad if you can understand the limits of your front end. :yup: For anything more than moderate wheelin a d44 front end is a must IMO 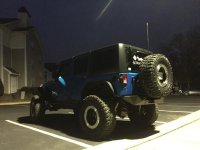 been running 37x13.50 stt pros for a year. No problems at all. Just take it easy on the skinny. Use good judgment

Iv had no problems with my 35s on my Dana 30 I just go to crazy you have to know your limits and I also have c gussets.

I run 37's on a D30, you just have to wheel smart, as stated the skinny pedal can either be your best friend or worst nightmare.

Had 35s on my d30 for about 5 years and 130k miles with many wheeling trips. It was Gusseted and sleeved but it was an open diff as well, which does nothing for the housing but helps the internals a bit. Stay off the skinny pedal and don't treat your rig like it's a rock bouncer and it has a chance to hold up

AllAmericanInfidel said:
I think it will be fine Pete. I ran 35s on Crystal most of her life and had only one issue, which was the passenger side I joint failure. Once replaced, it never gave me issues again. I'd say 35s with a D30 are fine as long as you keep it 4.88 or less, as Eddie mentioned. Oh, and your rig would look sweet on 35s, so stop thinking about it and do it already! Lol.

This was definitely me. I was back and forth for a while about stepping up. My 35s will be here next week. Gussets going on then ball joints and new tires. Can't wait to see how it's going to look. It's sitting on rc 3.25 inch lift with chopped fender flares.


Sent from my duck blind.

ScoobyCarolanNC said:
I feel like this is a support group. "Hi my name is Scooby & I ran 37s on my D30."

I've been running 35s on the dirty 30 for 3 years until last fall when I tore everything up. It does it job, but just like everyone says, it will eventually fail at some point or another

It seems to me it you are careful with the skinny pedal and do not do major rock crawling it would prolong replacement of the 30.

ScoobyCarolanNC said:
I feel like this is a support group. "Hi my name is Scooby & I ran 37s on my D30."

As Eddie and others have said, there is nothing wrong with the Dana 30. You can run it with 35" tires all day long as long as you understand what you've got. I wouldn't recommend a 37, but some roll with them and have had good luck.

Here are our recommendations on for running a Dana 30 based on our experiences (if others have different opinions that's fine):

As mentioned a few times here, don't go lower than a 4.88 gear because the teeth on the pinion get weak and small with less surface contact. A 4.56 gear is probably a better choice in regards to strength if you're going to tackle bigger stuff. If you have a manual and plan on doing Rubicon and bigger trails those low gears become more important, food for thought...

Open diffs or TrueTracs are the way to go. A standard clutch style limited slip in the front will trip up the traction control because they generate drag between the wheels. A TrueTrac is one of the few solid options for a Dana 30 JK. If you're planning on upgrading to a new axle in the future than I might hold off on the TrueTrac, get an ARB for the rear and run it. But, if you're planning on sticking with 35's and don't plan on pretending your JK is a rock bouncer it's money well spent. The best option if money is not a factor is of course a selectable locker, but then we are getting into money spent on an axle that probably isn't really worth it. With a TrueTrac and and the proper driving technique you'll get everywhere you can get on 35s (which really is pretty much everywhere!).

Don't upgrade the axle shafts or U Joints. Use the stock axles as a fuse. A set of Nitros or RCVs will move the fuse to your ring and pinion. Go to a junk yard and pick up a set of crusty trail spares and just pack them with you. Chances are good that you'll break an axle shaft eventually, and that's ok it's all part of the adventure. It's generally a pretty painless trail repair as far as these things go. If you don't break them, your buddies will. Then you can give them out on the trail in exchange for beers and those delightful burritos you buddy's wife made, those sandwiches you packed kinda suck.... Win/win. What did that spare cost you? $25? WORTH IT.

C Gussets are absolutely a worthwhile investment, do it if you plan on keeping your Dana 30.

Opinions of sleeves and trusses are mixed, but one way or another they are not worth it for a Dana 30.

The last, and most important thing about a Dana 30 is the attitude of the driver/owner. First of all: stop worrying about it! Enjoy the Jeep you have! Your Dana 30 isn't "the best," but with a little money spent in the right places it'll keep right up with the big money rigs, so who cares! If that's what your JK has and you don't have or plan on allocating the budget for a new axle, RUN IT!!! I wheeled a mashed up XJ with a Dana 30 with 35" tires for YEARS. I drove it like I stole it, or at least it looked like it. I tried not let it bounce, I didn't floor it in reverse. I killed the 300K mile 4.0 and dropped a big, fat, silly stroker in it. I broke the long side axle twice, and every time I knew that I was being an idiot. I conquered everything in Moab, the Rubicon, Johnson Valley.... all for the low low price of FREE with the Cherokee. I ran it with 4.56 gears and you guessed it: A TrueTrac. It died about 6 years into its life, driving down a fire road when the left front tire caught a rut and literally twisted the axle tube out of housing in a freak accident. We replaced it with a D44, but only because it finally died. I then sold it to another XJ owner for $300. Not a bad deal.