Status
Not open for further replies.

wayoflife said:
Most people think I'm white or at least, until they meet me in person or see me on the internet these days. That's not bad in and of itself but I can't say that I've heard them share anything that would offend me before or after knowing that I'm not. At least based on my own personal experiences.

I have traveled all around the country and I can't say that I personally have ever seen or experienced a single instance of "Nazi, white nationalism" ANYWHERE.

LOL - because clearly, most people think you're white.

Brute said:
Liberal?...far from it. White Supremacy is currently the biggest threat to US national security...according to those in Trump's own National Security Council...

I've been voting for conservative Republican presidents far longer than most people here...
Click to expand... 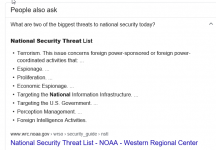 A whiskey rocks with a whiskey shot chaser. That is money right there Doug. Cheers. 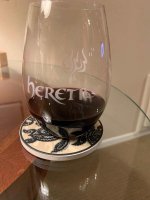 JAGS said:
A whiskey rocks with a whiskey shot chaser. That is money right there Doug. Cheers.

Thought this funny when I was scrolling through YTube.

JAGS said:
Not as it’s ever been.

At least based on my own personal experiences. Most people think I’m white. That not bad in and of itself. But people share things they may not normally if they knew who/what my parents are.

There are many things I can let slide....but Nazi, white nationalism is where I draw the line.

I have personally seen an intolerance like never before.

Not that most people care about my opinion....I don’t expect anything different here. But I am more vocal about “tolerance” now than ever before. Based on my own personal experiences of hate.
Click to expand...

We’re these personal experiences ever shared? If so I missed it. If not, this is exactly the problem with this country and the people in it. People are driving wedges between all parties in this country on some bullshit that isn’t true just so they can fee a part of something.

WJCO said:
Don't take this the wrong way, but the power is not in Trump. The power is in us, The People. I'm very neutral on the "Trump" subject, but We The People need to step up, rather than waiting on a political figure or the next "expert" on the screen to tell us what to do.
Click to expand...

I’m not a fan of the decade age difference placed in that bill. That said, I’m also not a fan of a senior in high school ending up on the sex registry because his/her girlfriend/boyfriend (who is also in high school) is under the age of 18. The old law had bad unintended consequences.

Unfortunately, they are replacing it with a new law that will have bad unintended consequences. 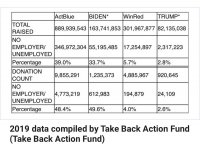 Lots of phones being wiped clean, unemployed people donating millions with no way to track it. Drug $? Might as well be.
If I tried something like this, if I broke the law I’d be going to prison.
They can get away with murder if they want to.
Not taking sides, but this is bullshit from any side.
My 2 cents.

That dude from Mississippi

Sharkey said:
If you truly believe in the Constitution and the Rule of Law, then you understand that how a particular action is taken is sometimes even more important than the results of the action. Collectively, the two parties in power seem to no longer understand that point.
Sent from my iPhone using WAYALIFE
Click to expand...

The two parties put their own interests ahead of the Constitution, and the American people. That fact is easy to see, if you are looking.

I found this an interesting read.

I thought retired was a separate group listing :idontknow:

but it can also include the children of the wealthy being handed maximum donations to give or given in their child's name.

Too many ways to skirt the rules.

Personally, I think campaign finance laws should be put back in place; let them raise all they want, but limit how much they can actually spend and the rest goes to lowering our national debt.

The Supreme Court got this one wrong in 2010 when they prohibited putting limits on election spending and opened the doors for creation of PACS and Super PACS....and to think, this all unleashed because of a political film of then Senator Hillary Clinton and her (1st?) presidential attempt? I've forgotten the specifics.

I completely understand and agree with most points what you guys are saying. What I’m getting at is that graph is ridiculous. It’s to generate a biased talking point.

I would normally agree, however “retired” people are on fixed incomes and the few retirees I know are less worried about donating to political causes and more worried about medical expenses. In addition, if those numbers are right (not saying they are) they are suspiciously skewed to one political side.... I would expect something more evenly distributed, at best.

Does that category include people who are self employed? 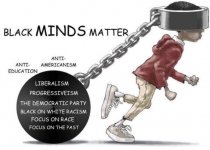 Of course they are - why is this no surprise? Why not have the country responsible for Covid do the testing for it? :crazyeyes:

Status
Not open for further replies.