Meanwhile my wife always liked trucks better... I had sold a Titan when I bought the JK... and she always wanted to have a truck for the utility side of things. When the JT's came out I set up the mechanics and she picked the color. So we had a Sport max Tow ordered. I was nervous about a first year truck from fiat... so I didn't really want to put much into it until we decided if it would work for us. I put in a 3/4 inch rear spacer, front 1.5 inch spacer and picked out a set of launch edition rims and tires and fox shocks ..all for 1400 dollars and that has been about all of the mods.

Currently waiting for all the parts to come in, but 3/4 of it is here.

I went with the EVO overlander 2.5 lift... added the Fox shocks for a 3-4 inch lift. I'm keeping the rear spacer and dropping the front to 1 inch spacer... and using coil correction pads. They were out of track bars so I bought a Yeti steer-smarts one for the front and a Rock crawler for the rear. I bought a sway bar disconnect for the front... just a manual one. I also added a fox steering stabilizer and relocate kit, to get it up front the ground.

I went with the Artec skid plates because the trucks are long... the breakover scares my wife when it makes noise under there.... so now I tell her its just skid plates... and the Artec kit does a "tummy tuck" and raises the GC by 3/4 of an inch and covers everything in the middle really well. I got an Artec FAD skid too. And then a Rusty's rear Control arm frame side skid.

I have 4:88 spicer gear sets, ARB lockers front and rear, RCV with FAD front 32 spline axles. For the rear I had dutchman 35 spline axles made... I also have the Artec truss for the rear. Metal cloak rear diff cover, ARB for the front. Right now I'm still waiting for the RCV axles and the rebuild kit. The lockers and the rear axles are in!

I have mounted the Rugged ridge snorkle... and color matched it to the truck, I did go with just the lower side mount. AFE filter.

I have the American adventure fender chop for a sport coming in to make room for tires. also on back order.

I have an ARB compressor that I will use with the Wayalife mount under the brake booster for onboard air and to activate lockers. All of that is in and I will install soon.

I went with the Method rims with Bead-grip tech... I do a lot of snow wheeling and getting down to 6-8psi without loosing a bead will be great! I went with a tire I have never tried... Yokohama 37's ATX.... still waiting on rims and tires (6 weeks now). I heard great reviews and that they are close to true size... loaded with 32psi they sit just above 36inches... so they are close to many 38's.

I got front and rear rugged ridge bumpers with discounts for under 500 for the pair... so it works for me.

I did a bunch of work on a strangers jeep and they gave me a broken Warn winch... I put a couple hundred into it and mounted it! It is an M8000- so a little small... but for free it will fill the gap!

I bought some rough country side steps to protect the paint and my wife wanted a step... they were dirt cheap in a freight return deal... so I don't know if they will make the build... they might need to work for a year or so... and then I'll look at frame mounted ones.

I got a cheap GPS, mostly to keep me from getting lost in cities. A CB... our club is still old school...

I never buy expensive lights... but for this build I did get the stealth light bar... which has been great... I like that it is inside...

I bought some LOD bed skids to protect the rear.

I bought a tazer mini for the adjustments.

Now to get all the parts in and put it together! I will do most of the work myself... I just don't do gears and lockers.

P.S.- I'm building my own topper too! 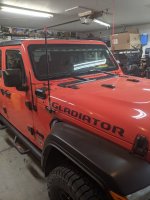 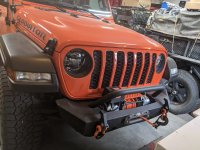 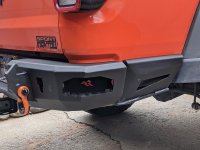 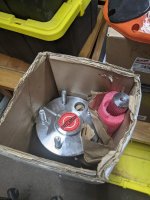 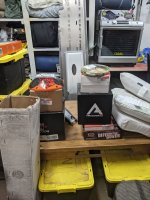 sunnysideup said:
I bought some LOD bed skids to protect the rear.
Click to expand...

Did the LoD skids come with the frame brackets too?

Congrats. Should make a fine rig.

WJCO said:
Did the LoD skids come with the frame brackets too?
Click to expand...

yes...( but they are one piece...skid and bracket are welded) they mount up to the same three holes the rubicon rear skids mount to... very heavy duty!

That’s gonna be a fun time installing everything. Especially the parts you don’t have to wait for shipping.

Gonna be a fun time!

Parts are showing up. Enjoy installing them

Gave up on tires from Yokohama.... just got told it might be another 6 weeks... ( I ordered in April) went with Nitto ridge grapplers... I have to say they were down my list a couple of places... but they were in stock. I just have never had a nitto tire before... and to be honest most of my buddies have never had them either... so its a new thing. Tire guys say 37's are hard to get right now! My Last overhaul kit for diff gears shows up tomorrow. Still waiting for RCV's... I took the gladiator in for the steering box upgrade today.... had to leave it overnight...they were missing the new bolts. So... hopefully I'll get a chance soon to put this together. Been working on weekends... so it keeps getting put off... and now its 106 ...lol. I did get a lot of work done on my homemade topper... while I'm waiting...but now I need parts for it that I'm waiting for! Lots of waiting anymore!

Your going to love the Nitto’s! Hands down the best tires I’ve ever owned have been Nitto’s.

Second on the nittos, they are the best that I have run

So, while waiting for parts... I picked up a free crushed camper shell... I modified it, repaired it, and turned it into a Topper for the gladiator. I thought I was going to come in under 500 dollars... as it sits I'm about 600 into it! But its 85% done! 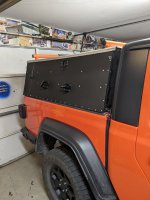 And... Tires showed up! So Lift kit will go on next.... maybe after Church?

Looks great. Not a bad price either. 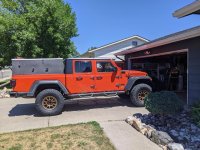 More parts installed.... I also took it on a shakedown run... fully inflated tires to see what would rattle...etc... In the pics you will see the Rancho track bar brace, the new Mopar Steering box, and a yeti track bar in the front. I'm using a teraflex swaybar disconnect... tight and quiet so far. Hi-lift jack mounted, water and gas tanks on the roto-pax mounts. JCR inside rollbar mount in the rear...

Also honey combed the back window, put some trim on the bottom lines of the board I cut, and made a Montana mural on the white piece I had to swap in....

Your build has come out great!!! We will have to hit the trail together sometime!

This was my plan for Air lockers.... I bought Eddie's compressor mount, built my own heat shield... to keep the cats from heating it up ( I tested the temps today - I took it on a 50 mile drive down interstate in 90 degree weather and It was warm, but I could lay my hand on any part and no excessive heat!) I also ran the air lines into the frame for the lockers.... not a fun chore...but it worked! I have since wrapped any place it exits or enters the frame with 1/4 inch rubber line or wire loom for extra protection. Now... got to finish electrical and get lockers installed! Eddie's video on the install gives you all the information you need to set the compressor for your needs.

So if you have not guessed... I like some old school looks...even in a modern JT truck. When I bought the air lockers and compressor... and the redarch brake controller... I had a plan to take the dash apart and make the switches look like they fit. I didn't have to buy anything... I just had to work at it. The ARB harness is proven and robust... the switches last forever. I then looked and noticed the aftermarket came up with a switch group that fits right in the hole next to the Aux switch panel - but in reading the small print they install a lot of things.... like rev limiters, 4wd low only... Not that I often want to use a locker at speed or anything like that... I just hate the reliance on the chip inside the aftermarket panel telling me what I can and can't do. So- back to old school and cheap. I used my drill and jig saw... and made a panel and wired it all up...and it has a tinge of old school...but looks like it belongs! I cleaned it up after the photos...it was dirty in the truck... but all of them fit, they all work and all the lines are leak free! Just have to have the axle side done now! I also had to change up my air chuck at the top... since now the compressor can't just dump air until I attach a hose... I fixed that part too!