Staff member
It's been about a week since we first started to cover the 2014 SEMA Show live in Las Vegas, Nevada, and now that it's all over, I thought it would be good to do a quick recap on some of the cool rigs and innovative new products that caught our eye. I should note that the first thing we noticed about this year's show was just how busy it was. The crowds were out in force like I haven't seen in years and I really hope this is an indication that the industry is finally turning around and that people are really starting to think about toys again.

Much like the last few years, the display outside the show was filled with plenty of big flashy wheels, truly lame 7-slot grille deletes and, what I like to call, the "caveman" grille thanks to its bizarre Neanderthal looking unibrow shape. On the inside (where all the things we really want to see are), there were a handful of rigs that really stood out to us and if I had to name a few, I'd have to say that the Fab Fours "Legend," the Daystar FC170 and the CRC's IFS Jeep JK-RK (Raptor Killer) would have made the top of the list and you can see them all below.


THE LEGEND BY FAB FOURS
If there was just one Jeep JK Wrangler at the 2014 SEMA Show that got chatted up more than any other in the Off-Road Hall, I'd have to say it was the crazy looking Fab Fours "Legend". With it's sinister looking chopped top, huge 24" wheels, massive 50" tires and enormous wing-like fenders, how could you not just stop and stare!

You can see more photos of this JK here: http://wayalife.com/showthread.php?21642-2014-SEMA-Fab-Fours-Legend-Jeep-JK-Wrangler-Unlimited 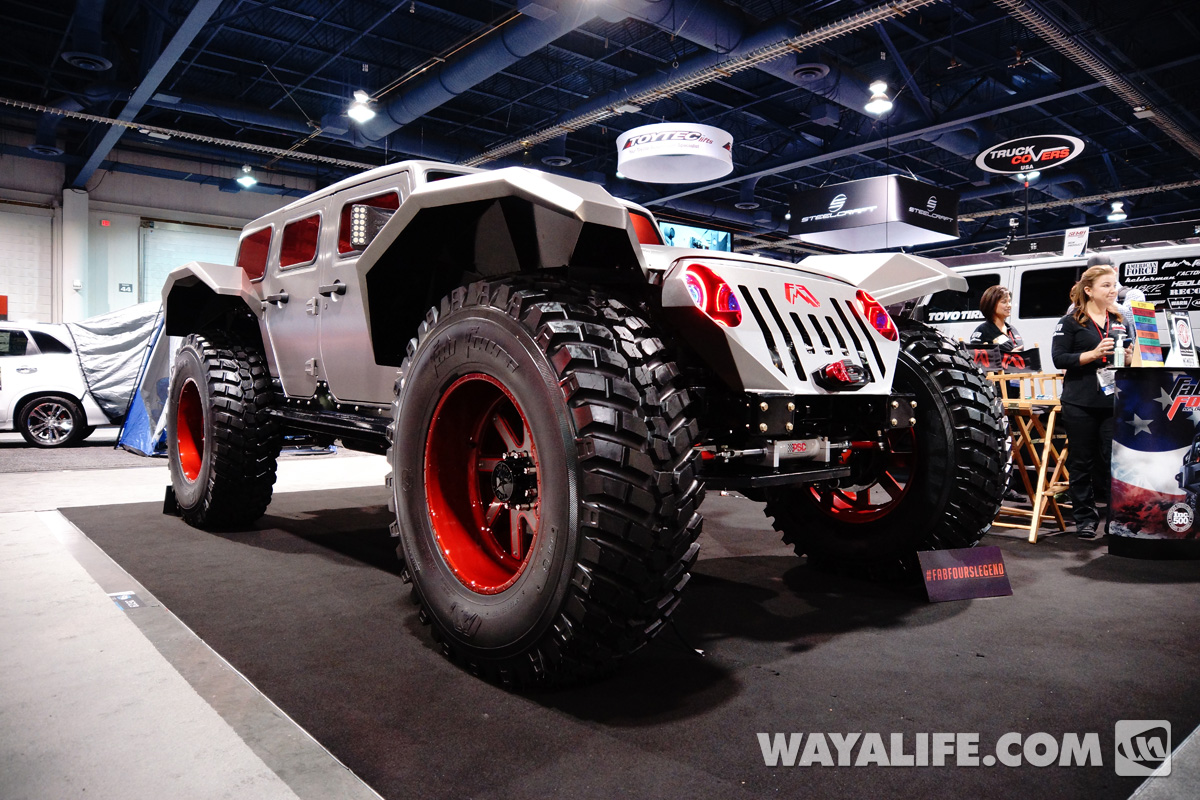 1958 JEEP FC170 BY DAYSTAR
Without question, the beautifully restored 1958 Jeep FC170 or, "forward control" pick-up truck on cat tracks that Daystar brought with them to the 2014 SEMA Show was by far one of the prettiest Jeeps I have ever seen, bar none. While I'm not a real fan of the tracks, the candy apple green metallic paint and lacquered wood bed were really fine touches. Of course, who couldn't appreciate the power of a HEMI under the cab!

You can see more photos of this FC here: http://wayalife.com/showthread.php?...FC170-Forward-Control-Pick-Up-Truck-on-Tracks 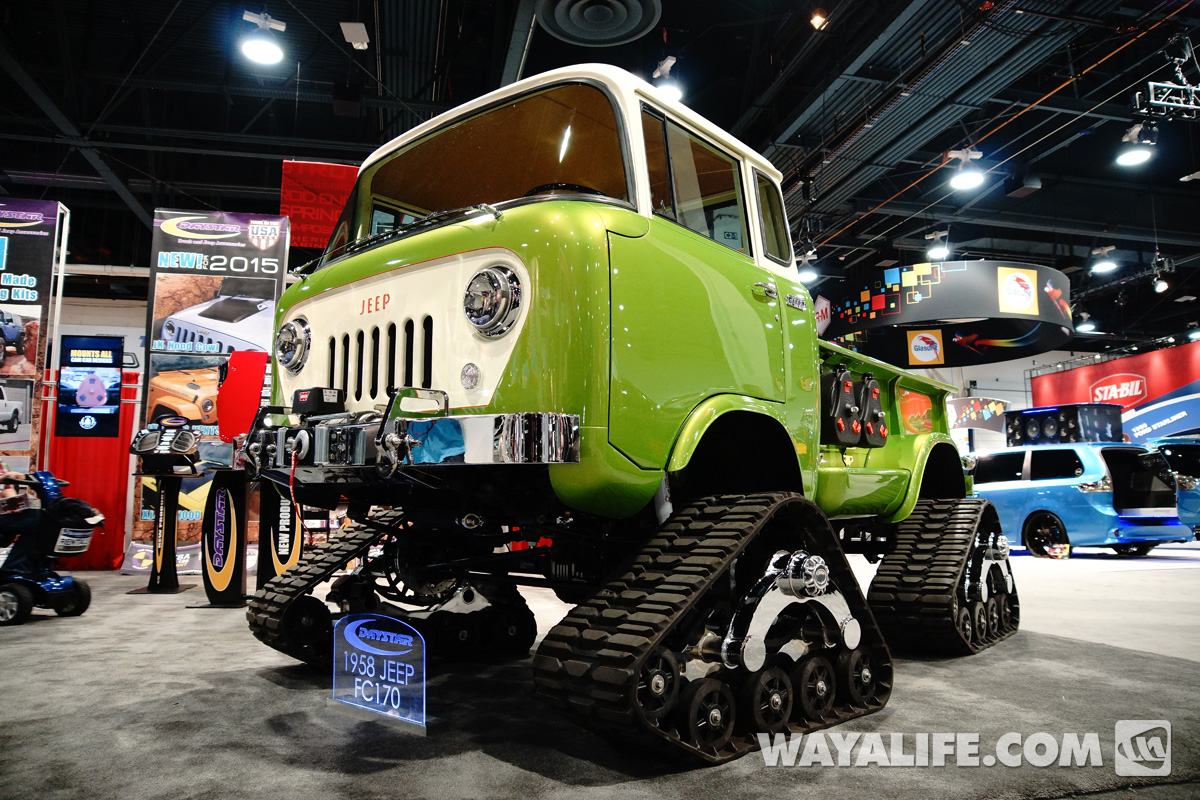 CASEY CURRIE JEEP JK-RK
Built by CRC Enterprises, the JK-RK or "Raptor Killer" that was shown in Bilstein booth at the 2014 SEMA Show featured a badass IFS system, trailing arms in the rear and a supercharged LSX motor that said to yield 1000 HP!! It's not everyday that you see a JK with IFS and this one really made us stop to look.

You can see more pics of this build here: http://wayalife.com/showthread.php?21677-2014-SEMA-Bilstein-Currie-JKRK-IFS-Jeep-Pick-Up 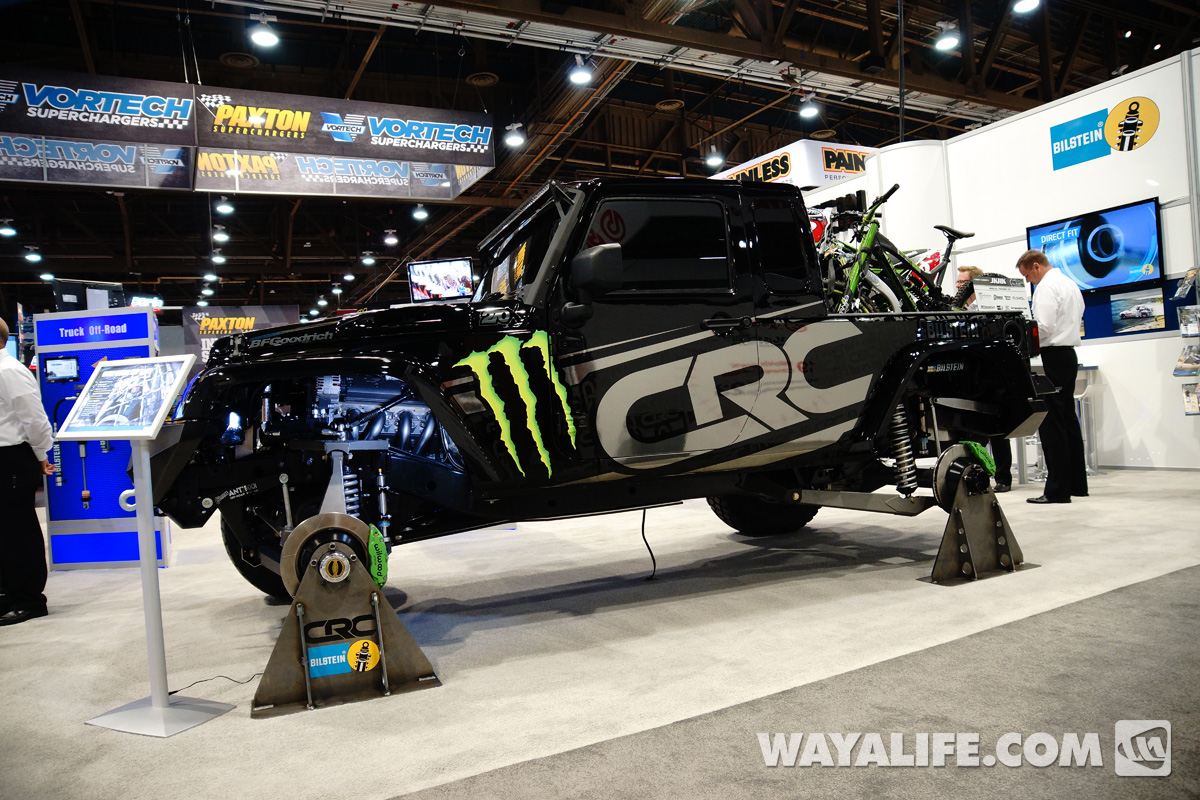 2015 JEEP RENEGADE
One of the vehicles we were most excited about seeing at the 2014 SEMA Show was the all new 2015 Jeep Renegade. This was the first time we got to see one in person and we eager as ever to sit in it and give the underside a hard look... just to see what all can be done with it of course. Here are the two Renegades that Jeep brought to the show - Frostbite and Riptide.

FROSTBITE
You can see more photos of this Renegade here: http://toasterjeep.com/index.php?threads/2014-sema-show-jeep-renegade-trailhawk-frostbite.90/ 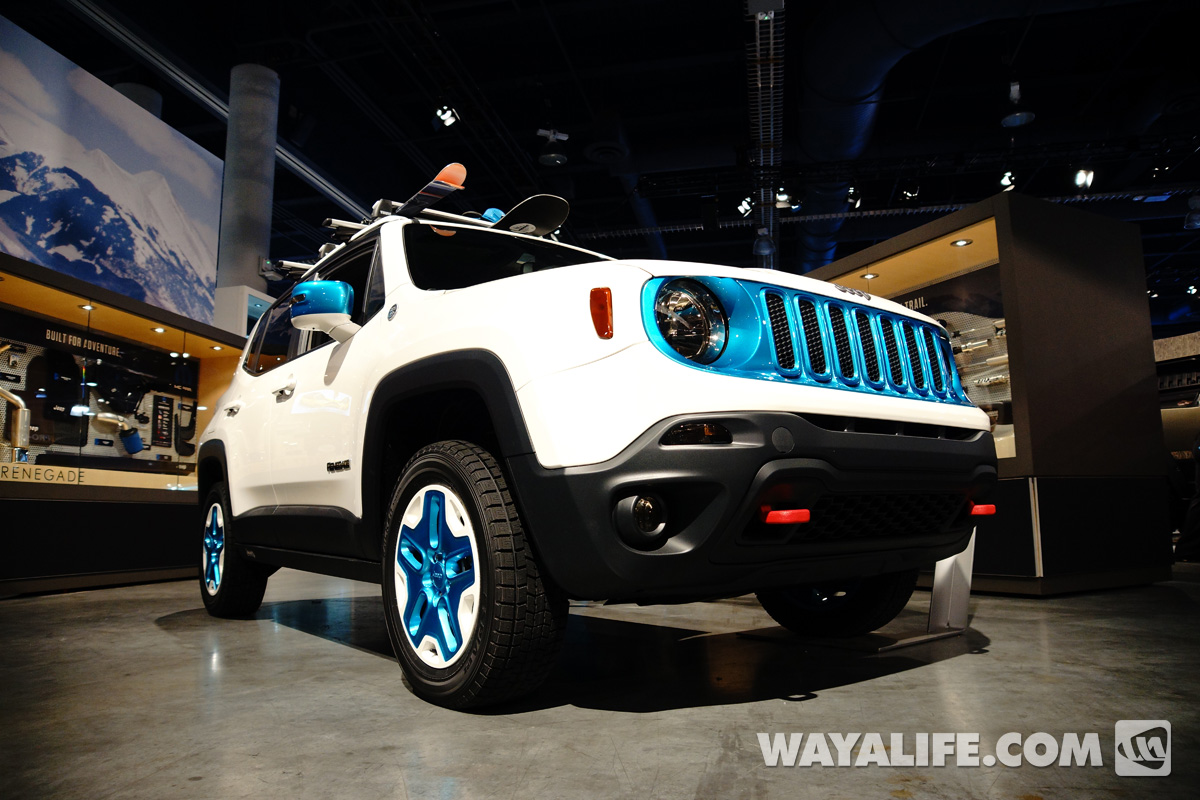 RIPTIDE
You can see more photos of this Renegade here: http://toasterjeep.com/index.php?threads/2014-sema-show-jeep-renegade-trailhawk-riptide.91/ 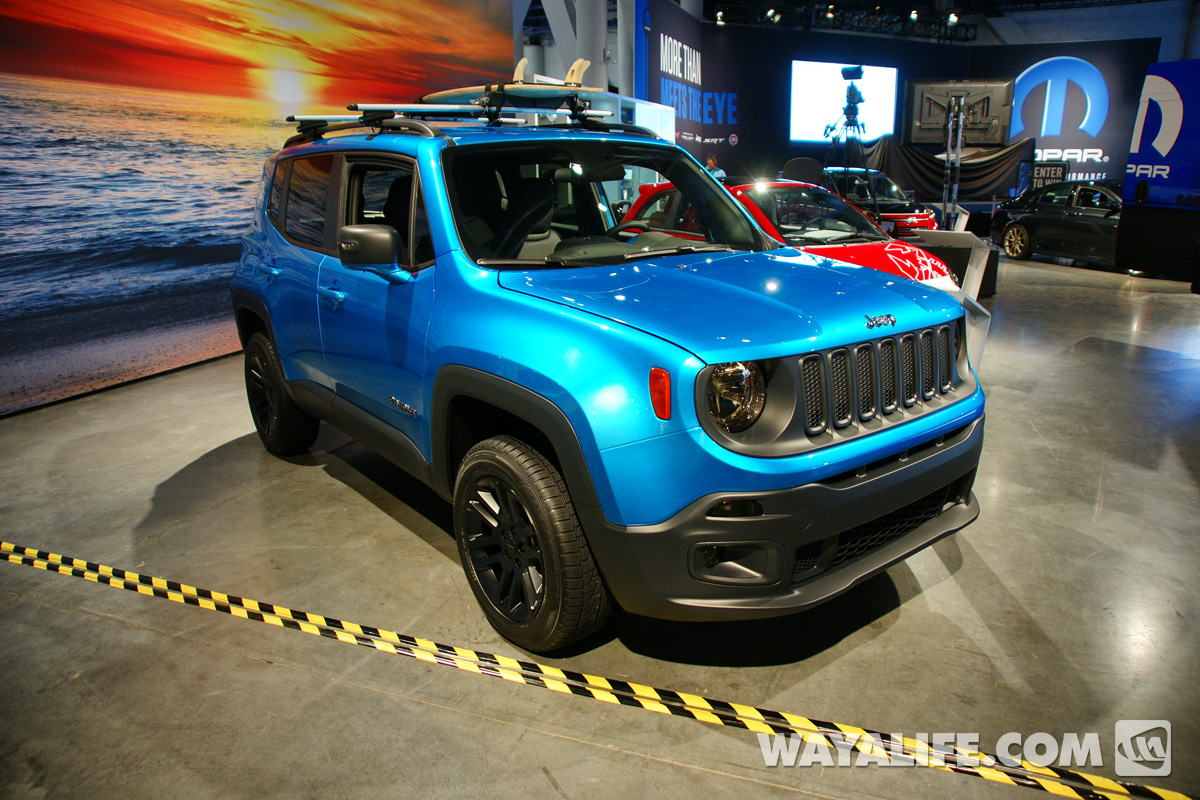 OMIX-ADA HISTORIC JEEPS
For the last few years, Omix-Ada has been bringing out a wonderful collection of old iron to SEMA and this year was no exception. Click on the links below to see these beautiful classics. 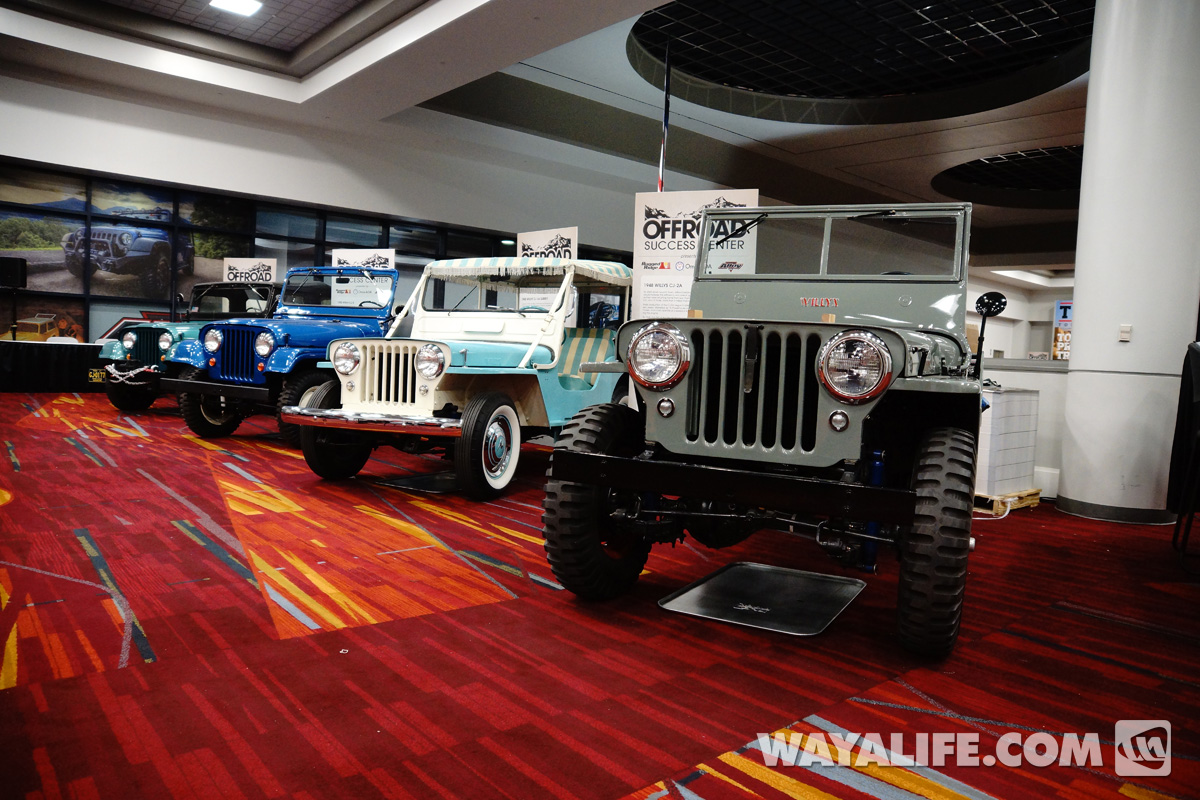 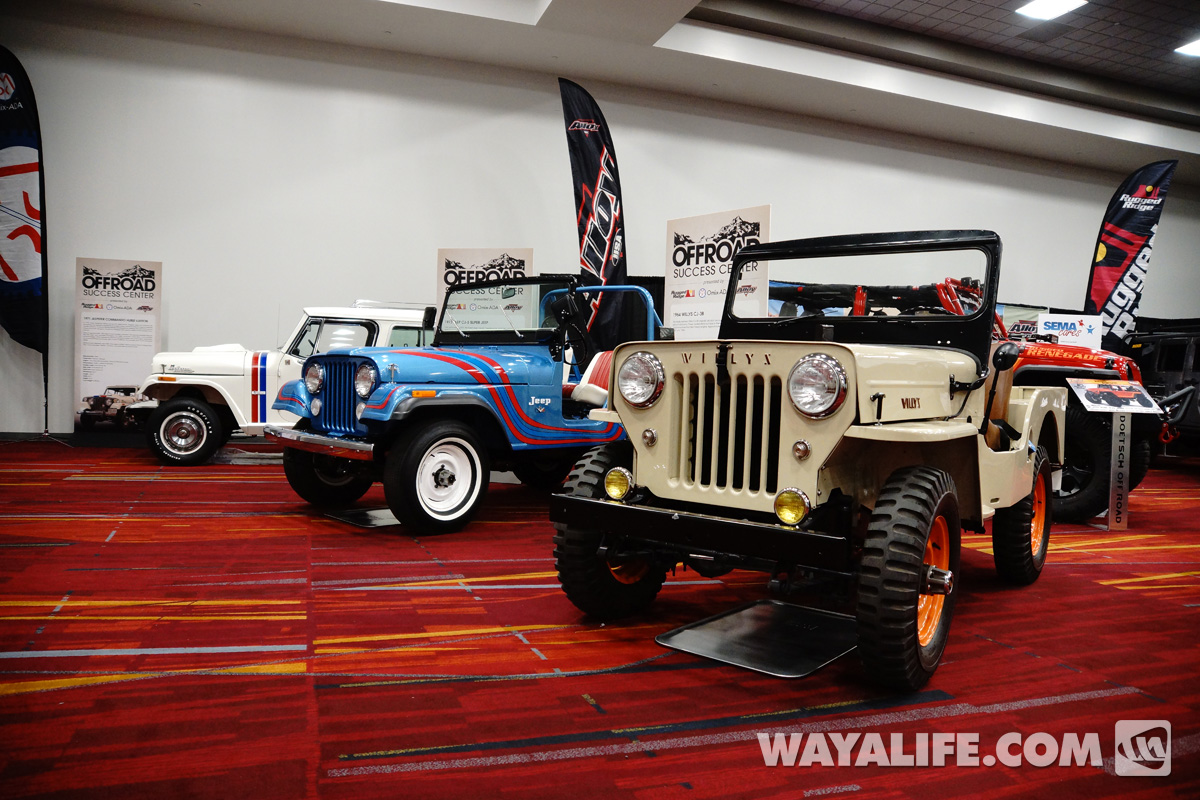 NEW PRODUCTS
New products for the aftermarket industry is what SEMA is all about, although there weren't as many as there were in previous years which is not too surprising since we are in the winter of the Jeep JK Wrangler production life. However, of the ones that really caught our eye, these are the ones I'd have to say are really worth noting.

Dynatrac ProGRIP Brake System
At the 2014 SEMA Show, Dynatrac released their all new ProGRIP performance brake system for the Jeep JK Wrangler. This brake system features balanced front and rear braking through its proprietary linings, proprietary larger rotors and new caliper brackets that have straight-beam links for extra rigidity. All this offers up to a 30% improvement in stopping capability over stock. 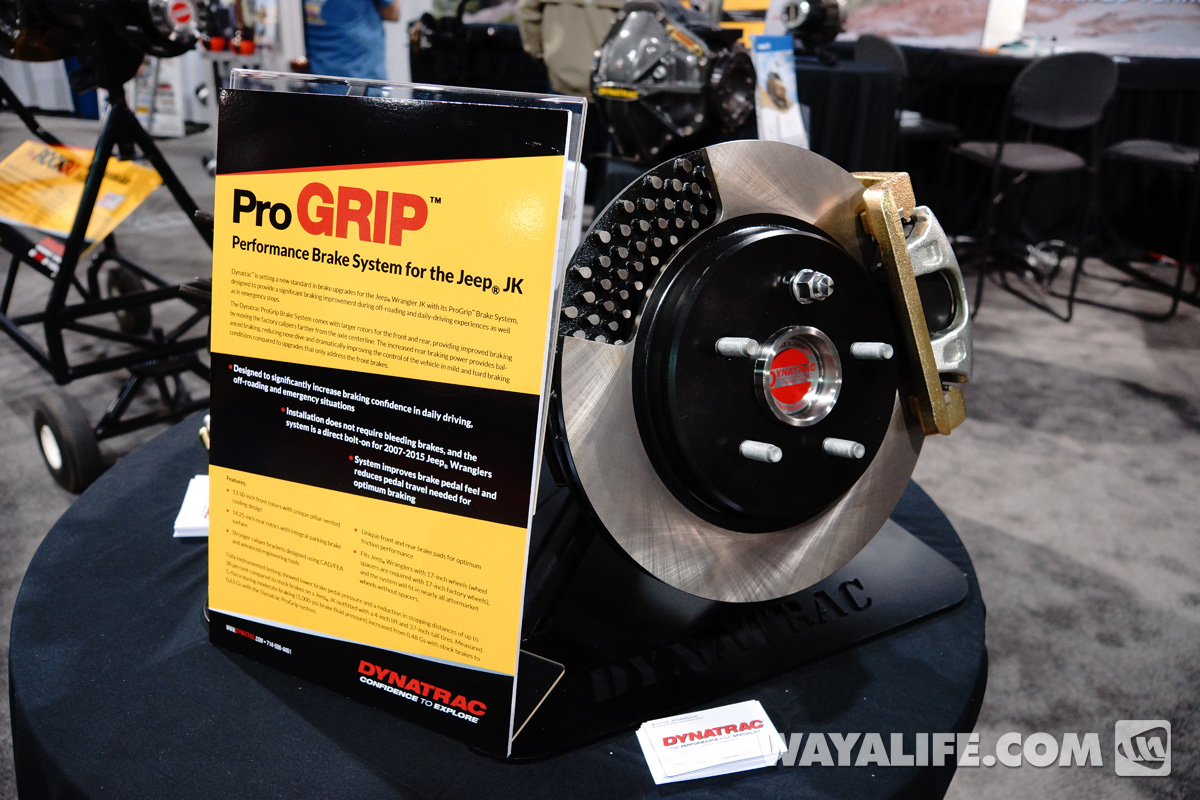 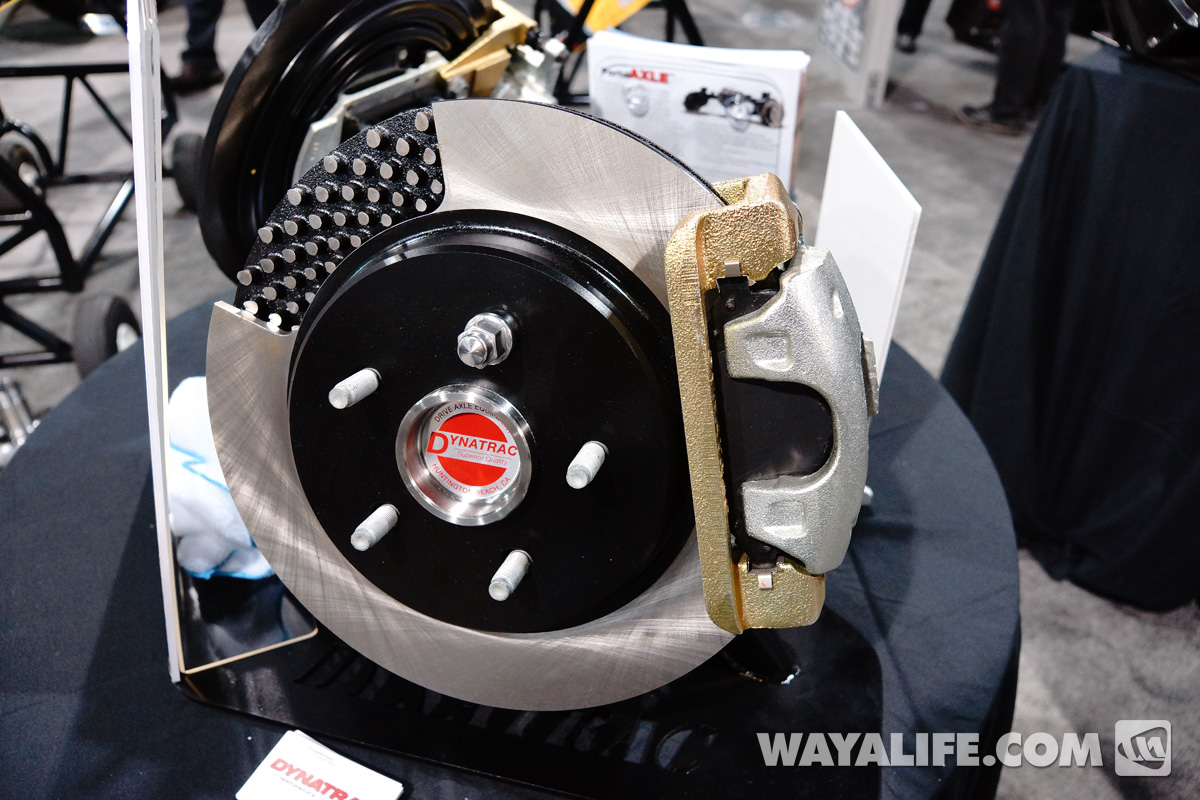 Dynatrac ProROCK XD60 and 1550 HD / 1550 LT Wheel Ends
Released at the 2014 SEMA Show, the Dynatrac ProROCK XD60 features the patented ProRock design which provides the BEST ground clearance in the industry, allows for a 10.1" ring gear which provides 16% more strength over the already strong standard ProRock 60, offers an optional larger carrier and pinion bearings for more strength, has a center section that is more ridged and lighter, includes a proprietary internal Dual Sump High Volume (DSHV) lubrication system and comes with an all new differential cover that has deeply recessed bolt holes to protect the bolt heads. When coupled with the all new and massive Dynatrac 1550 HD wheel ends that allow for 1550 steering joints and 3-3/4" axle tubes, you really will have the best that money can buy. 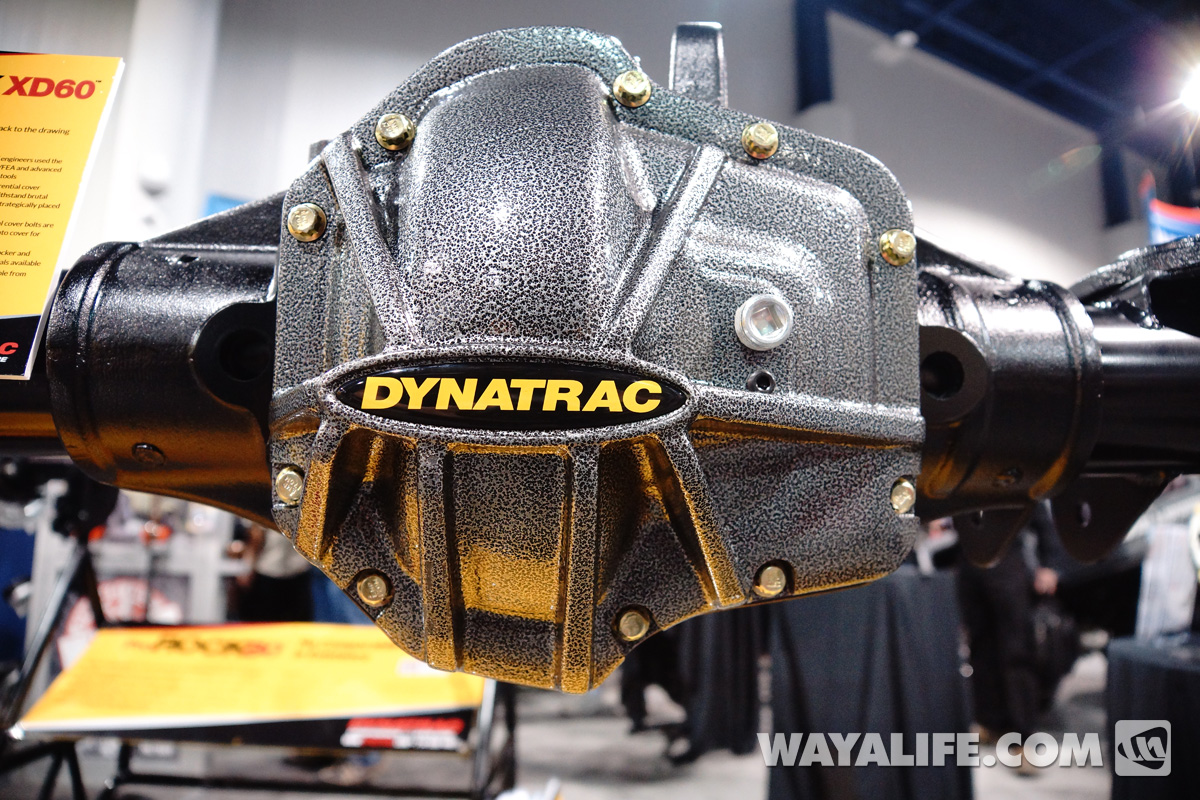 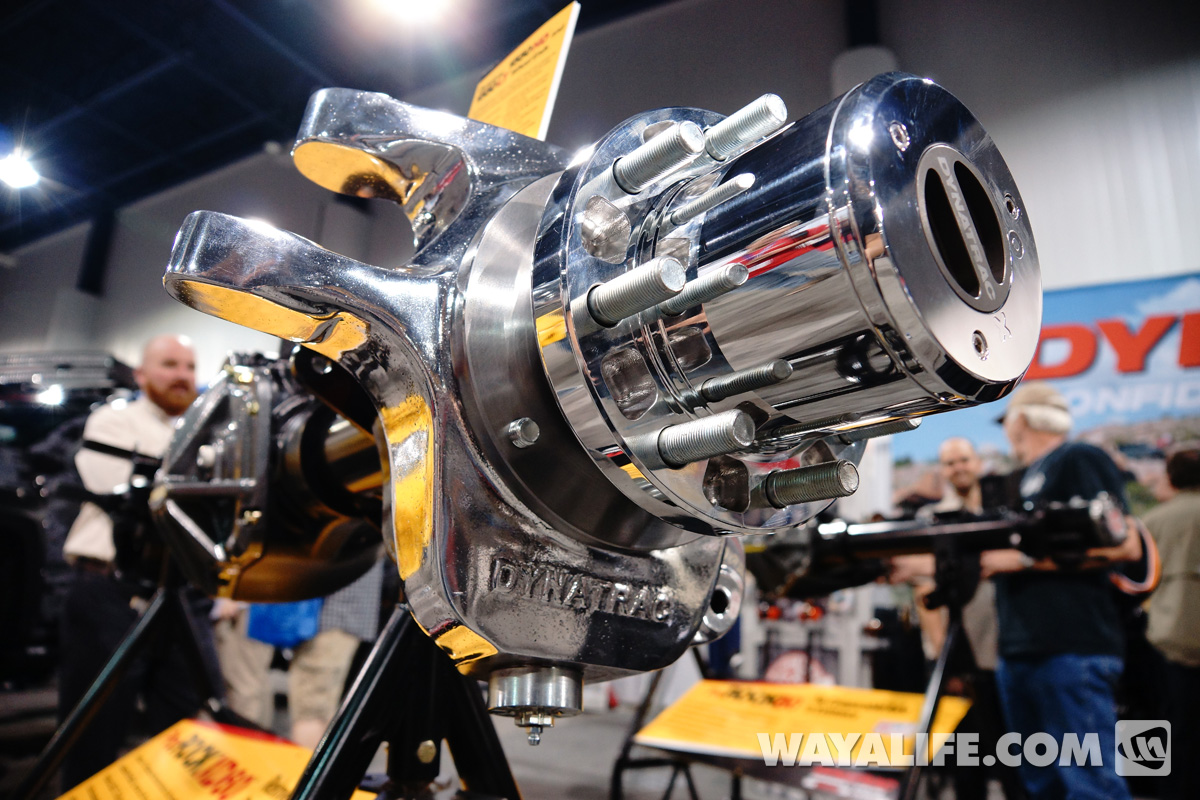 Bestop Trek Top Pro
Bestop released their all new TrekTop Pro at the 2014 SEMA Show and in a nutshell, it's a fastback top with all the fun that a soft top offers, options that a bikini/safari top provide and all the conveniences of a hard top as well. This top is made out of 30 oz. twill fabric for a nice quite ride, is built with a sunrider so that you can flip open the front like a sun roof, has a glass rear window complete with defrosters and optional rear wiper and comes with sliding glass side windows with screens. Maybe the best part of this top is that even though it's a soft top, there are absolutely NO ZIPPERS on it. In other words, it's a lot easier to install and remove the rear panels for a bikini top ride. 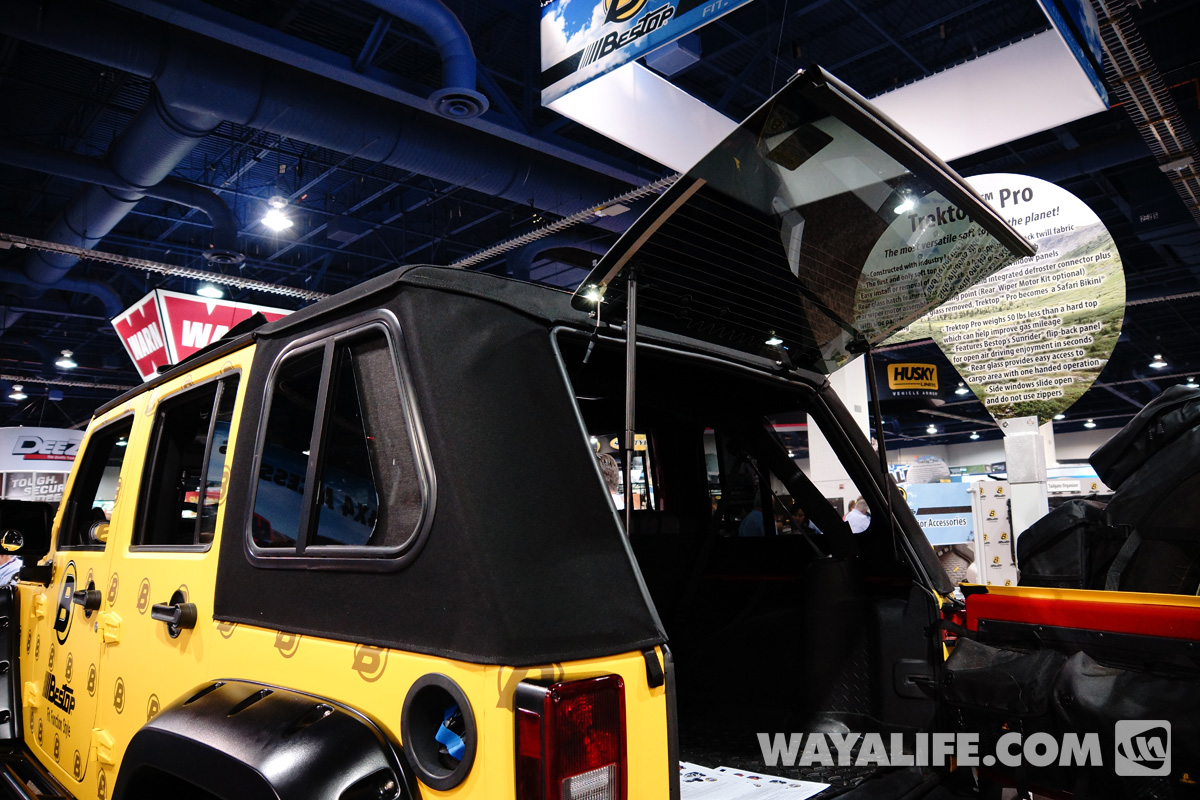 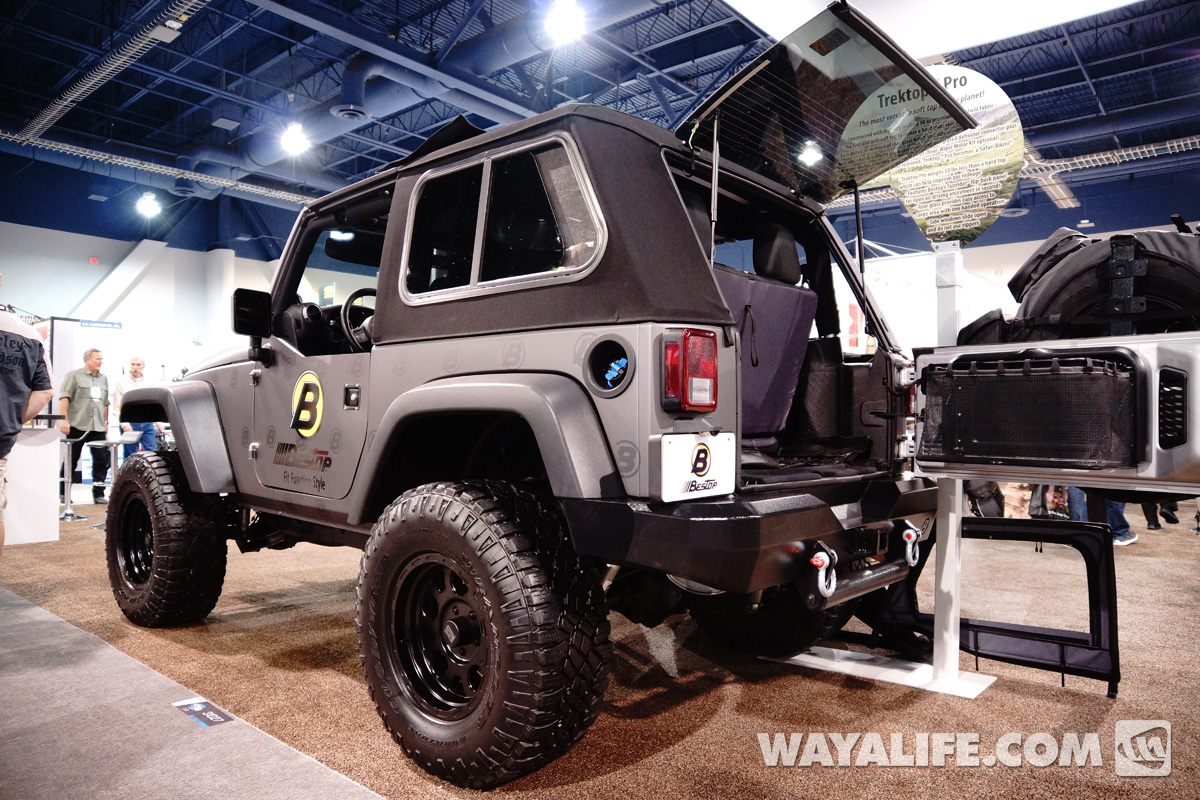 Truck-Lite Heated LED Headlight
While everyone would love to ditch their sub-standard factory headlights with a set of Truck-Lite LED's, the lack of heat they emit has been a concern to those who live in areas that see a lot of snow. Well, as of the 2014 SEMA Show, those concerns are a thing of the past as Truck-Lite just released their all new heated LED headlight - a first of it's kind! 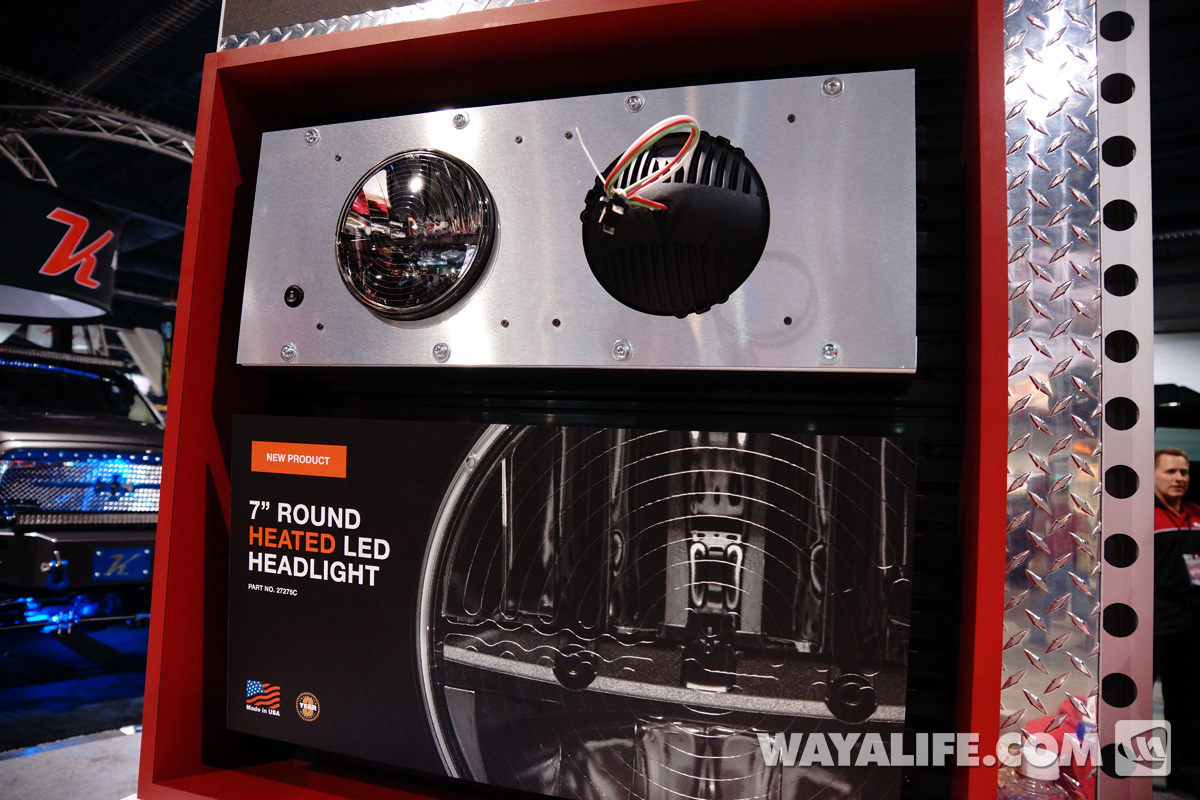 Switch Pros SP-8100 - 2014 SEMA AWARD WINNING PRODUCT
With a total of 8 fully programable back-lit switches, this amazing system is compact, waterproof, solid state, has a 100 amp capacity, a 100% duty cycle, is extremely easy to install to operate all your electronic devices and will be available for just $479. Without question, this is a WAY BETTER solution than the competition and really, it's the reason why it WON the 2014 SEMA Award for Best New Accessory. From what I'm told, these should be available for sale by the end of the year. 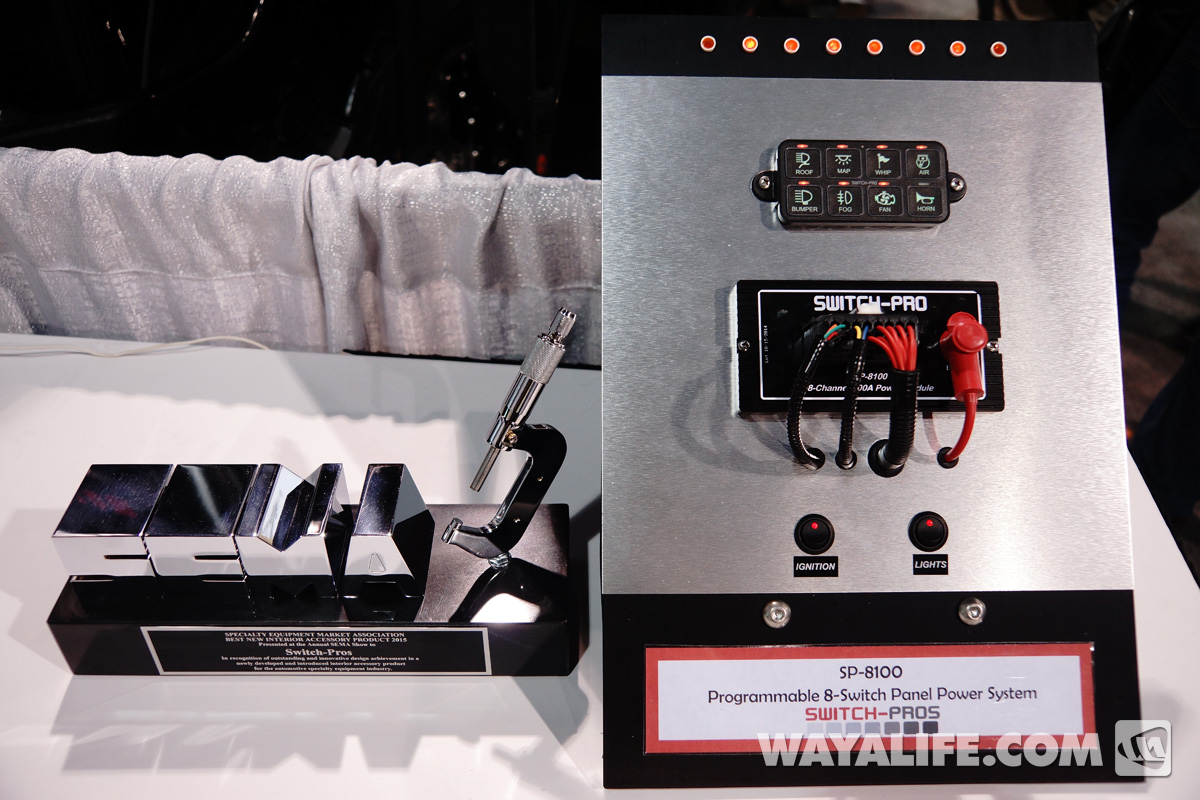 G2 Air Actuated Sway-Bar Disconnect
G2, a division of Transamerica (4WheelParts), showcased their all new air actuated sway bar disconnect system at the 2014 SEMA Show and I have to say that I really liked it! Certainly, it's a much better solution over old school sway bar link disconnects and perfect for those who have a Jeep JK Wrangler Sport or Sahara which didn't come with an electronic disconnect. You will need a small compressor to operate this sway bar disconnect system. This should be available in March and retail for around $800. 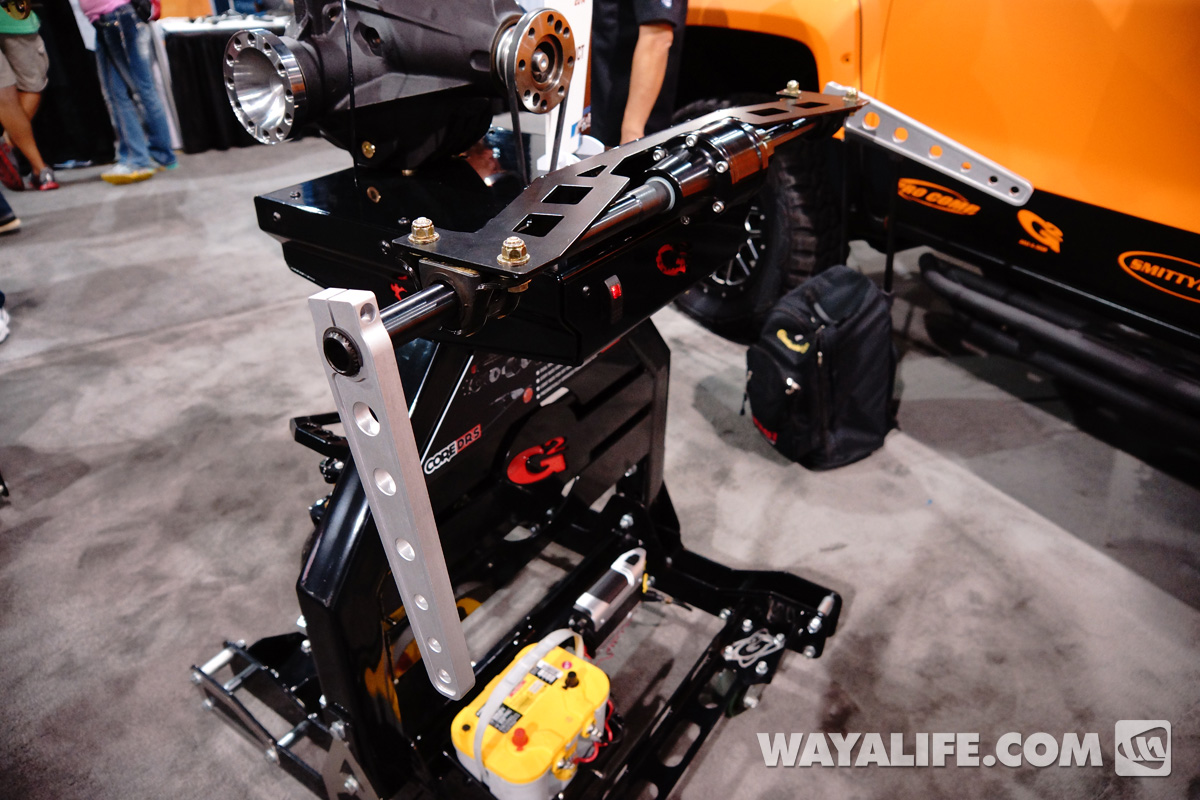 Mopar Flattop Fenders
The Maximum Performance Jeep JK Wrangler was the center piece at the Mopar 2014 SEMA Show display and featured a set of "concept" flattop fenders that sit a lot higher than stock. Not only did these nice new fenders catch our eye, they caught the eye of everyone who saw them too. It'd be a real shame if Mopar didn't makes these upgraded fenders a reality. 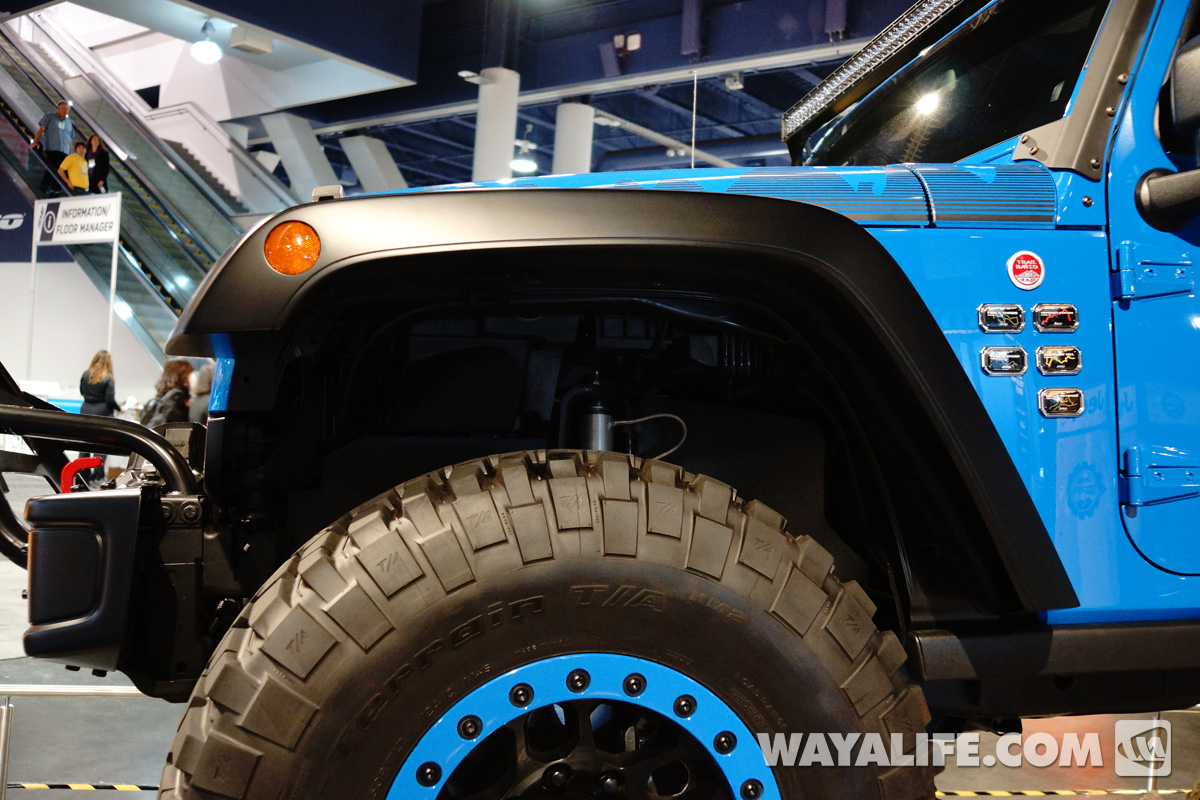 SEMA HOTTEST 4X4 SUV AWARD
There are a host of categories that SEMA gives awards to vehicle manufacturers and when it came to the Hottest 4X4 SUV, I'm proud to say that the Jeep JK Wrangler won it yet again. That makes it 5 times in a row now! 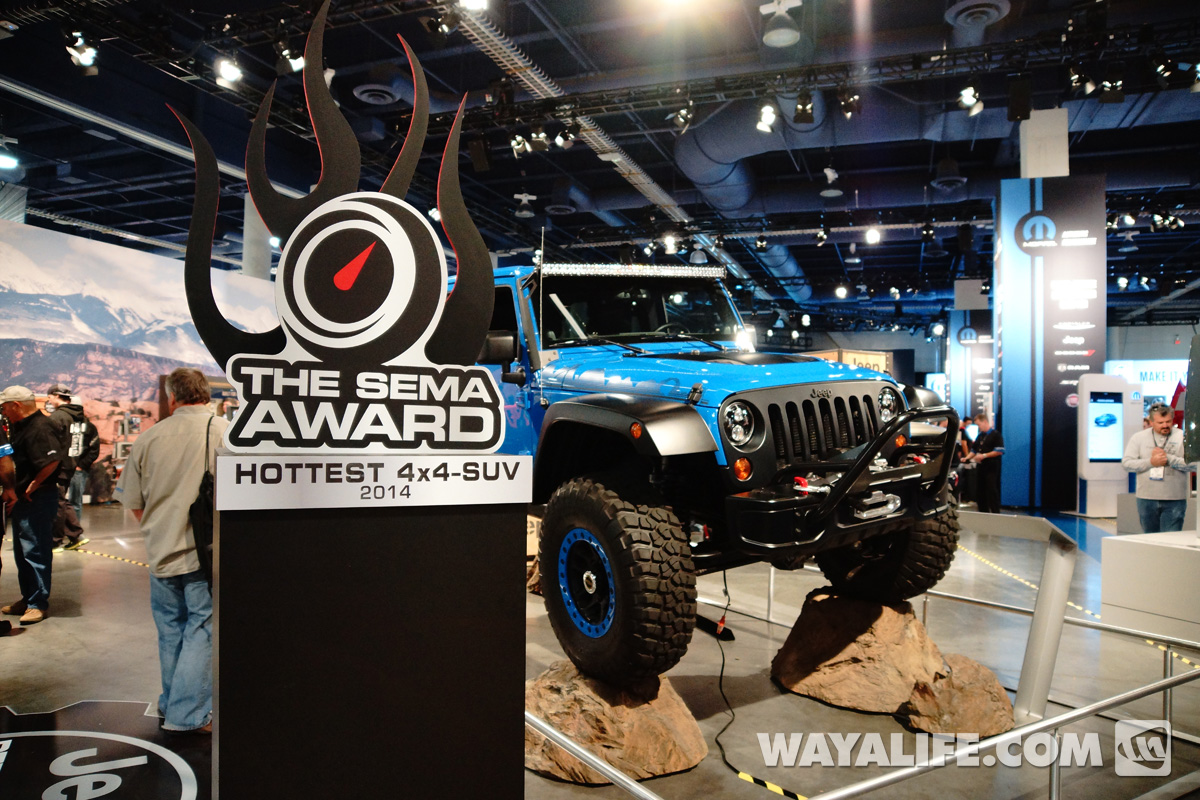 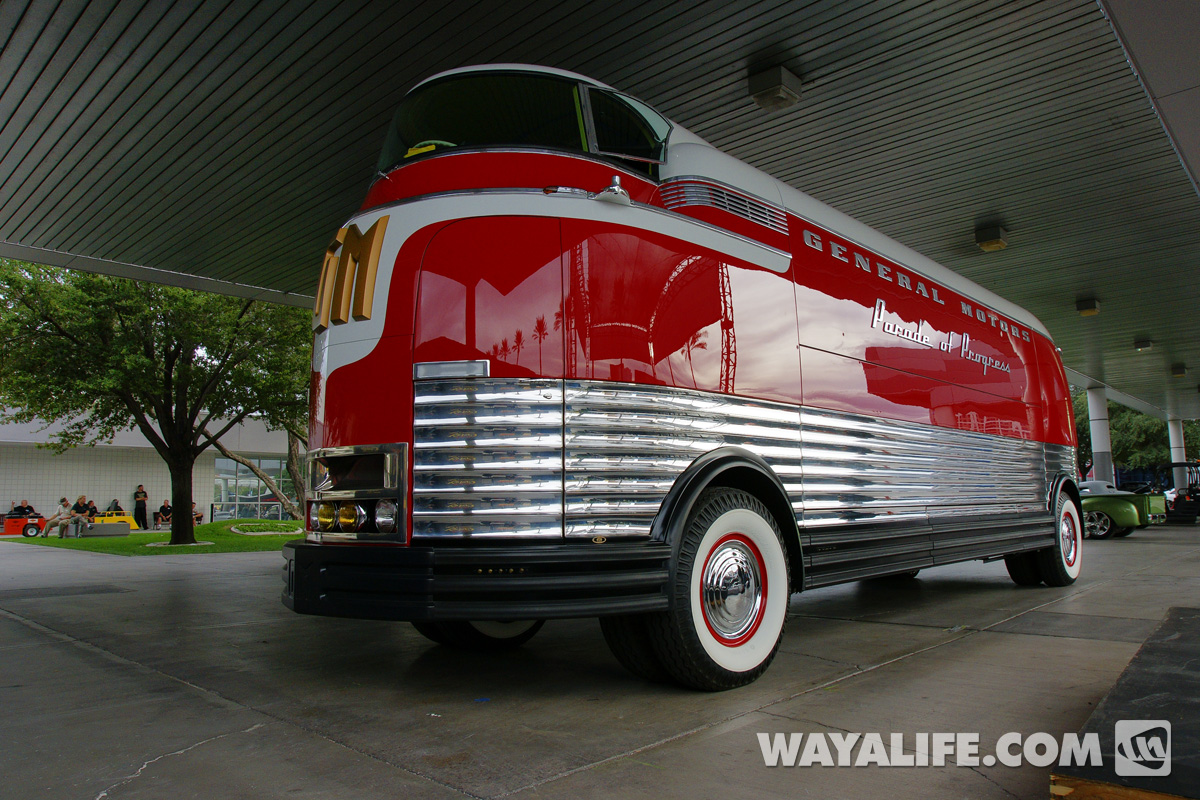 Amanda Jeep JK Wrangler
And last but not least, what would a recap be without an award for the nastiest looking Jeep JK Wrangler at the 2014 SEMA Show. For me, this is my pick for the dog of the dogs and ugliest Jeep I saw - clearly, a winner of the Raspberry award. 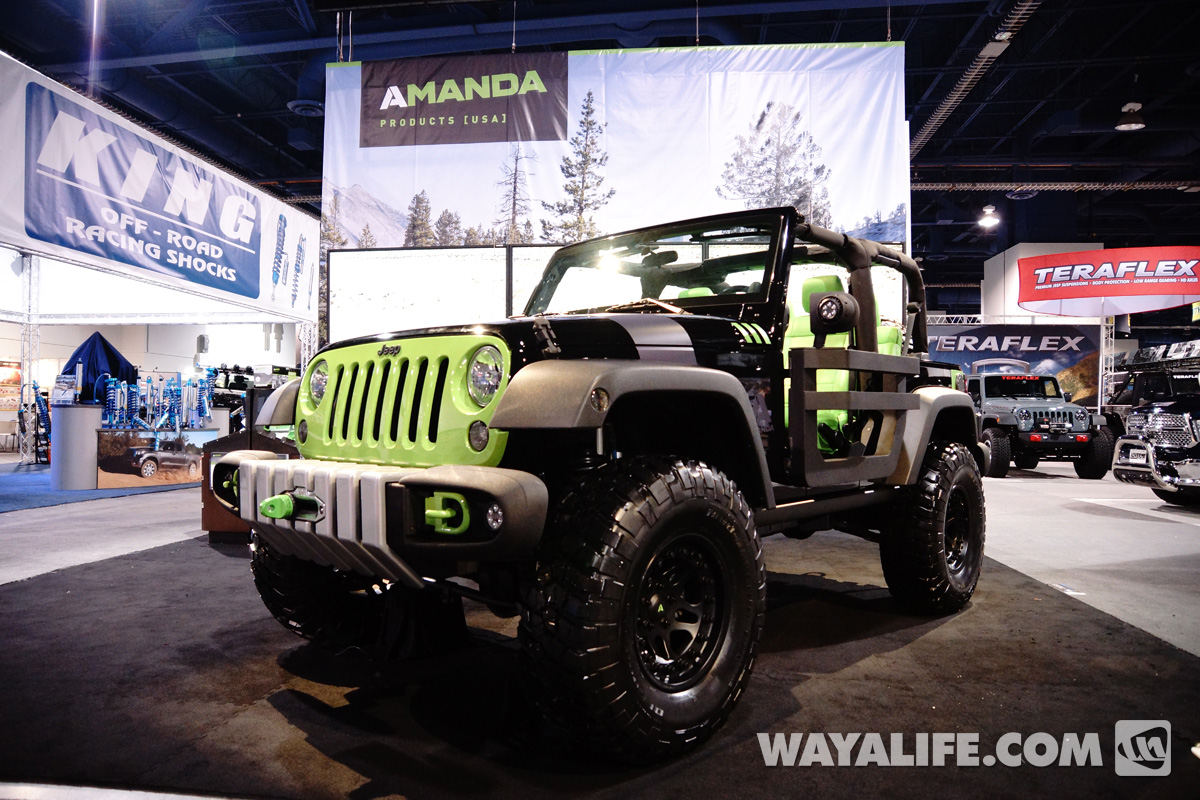 We hope you enjoyed our LIVE coverage of the 2014 SEMA Show as well as this quick recap. If you haven't seen the 4,000+ photos we posted up from the show, you can see them all by clicking on the link below and categorized by vehicle:

Thanks again for the awesome coverage! :thumb: :clap2:

Looks Awesome! Thank Y for all the great information!

Agreed, thank you for the coverage! Im going to keep my fingers crossed for those fenders and my toes crossed that they are not a fortune!

Yes thanks Eddie and Cindy for all the photos. It was very entertaining this week for the folks that can't make it to SEMA

Thank you Cindy & Eddie for the excellent coverage of another SEMA Show. I look fwd to it each year almost as much as the JKX Video.:yup:

Thank you Eddie and Cindy for the best coverage of SEMA anywhere. You guys really knock it out of the park every year!!

Thanks again to the both of you. As usual, your coverage was so much better than anyone else's out there.

Thanks for doing the coverage. That was a ton of work, and it's appreciated.

That was great coverage for the week!!! :beer:
It was alot of work I'm sure, thanks again.

Many thanks to the both of you. Fantastic coverage. Now I just need to win the lottery.

Thanks Eddie and Cindy for going out of your way to provide us with all the information and eye candy from sema!
I'd say I'm most excited for the switch pod and the sway bar disconnect (and the new prorock, but let's face it, it's probably a higher price range and something to only dream about lol)

I read the entire thread in Eddies voice....

Hands down the best and most complete SEMA experience one can get without having a personal ticket. Thanks for all the time and energy to keep us posted on the all the great rigs, great products and the raspberry or two.

Guy with a Red 2-Door

A great recap! Thank you BOTH for the amazing coverage, high quality pics, and the countless hours you guys put into this as it seemed like no small task! You really made me feel like I was there even tho I was 2,000 +/- miles away!

Guy with a Red 2-Door

sethccole said:
I read the entire thread in Eddies voice....
Click to expand...

:cheesy: I'm not gonna lie I find myself doing that sometimes as well :yup:

Thanks for all the SEMA information. Great job